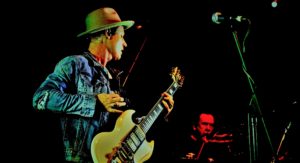 The global acclaim keeps coming for WA blues-rock purveyor, Matty T Wall, with the news that he has been nominated in three categories in the US-based 2019 Independent Blues Awards.

“I was so surprised to get three nominations,” Wall says, “ and that’s pretty cool. I realised that in 2017 the Blue Skies album got two nominations as well, so that’s five nominations all up in two years.”

Sidewinder, Wall’s second album, had made in-roads in the US over the last year, but he’s not one to take anything for granted. These Independent Blues Awards nominations, however, provide some tangible proof.

“At one point it was feeling a bit hit and miss,” he reveals, “because the first album was very easy to listen to and it didn’t have the rockin’ edges to it, those sharp edges, it was a bit smoother. That went down well with the blues crowd, then this new one, which is a bit rougher and sharper, expanded into a different territory. So I was in two minds about it, in a way, but obviously getting multiple nominations like this shows that people are liking it. That’s cool… I’m happy!”

The nominations split the blues genre with nods in the ‘Best Modern Roots Album’ and ‘Best Blues Rock Band’ proving that Wall’s music has diverse appeal.

“It’s a sign that the music isn’t easily pigeon-holed,” he says, “which is good and I do like that. It shows that it’s unique and that’s a good thing. Obviously I want to be different; I don’t want to be the same as everyone else. It’s a good sign for me.”

The world is calling for Matty T Wall and he’s certainly going to answer, but good timing and preparation is of the essence.

“I have an agent in LA who’s slowly been building things up and aligning everything in the right way,” he notes. “I can be very impatient at times (laughs) and in the past it’s seemed frustrating, but I can see now what he’s trying to do. He’s putting all the pieces together so when I do go over there it’s gonna work.”

Wall’s not sitting around in any case, work continues on his collaborative blues guitar LP project and a number of Eastern States appearances are booked and ready to roll through September to November.

“We haven’t performed in Queensland but we’re getting radio play there and the streaming numbers are really good in Brisbane and far north Queensland,” Wall says. “So we’re doing Noosa and Cairns – one’s a blues/rock festival and the other is a general music festival so it’s gonna be fun.

“The other two are in Victoria. Bendigo Blues n’ Roots, which is the main festival there and then Marysville Blues & Jazz, a beautiful place to go to and a great festival to be at.”

Wall and his band will also make a TV appearance this Sunday, June 9, on Guitar Gods, performing the song, Sidewinder, live in the studio. Tune into 7 Mate after the evening movie or play catch-up at 7plus.com.au for that one.

Wall’s recent string of shows at Clancy’s Fremantle, Ellington Jazz Club, Duke Of George and The Basso have captured a trio of musicians on fire. Blues/Rock fans are advised to catch his next run of shows before he gets busy over East.

“The band is killing it right now,” he says, happily. “We’re doing our blues rock thing and it’s just all flowing. People are up and dancing and the gigs have been freaking amazing.”

Vote for Matty T Wall in the 2019 Independent Blues Awards

and catch him live at these forthcoming shows…

June 30, The Bassendean Hotel – Sunday Sesh  – tickets at the door

July 28, The Bassendean Hotel – Sunday Sesh  – tickets at the door